The voting system at Beds SU is bespoke to us and therefore looks a little different to what you might see in a local/national election in the UK. We recommend you familiarise yourself with this as voters may ask you how to vote: any questions you can’t answer, please forward to elections@beds.ac.uk.

All registered students at the University of Bedfordshire, from all UK campuses, are eligible to vote. All students will vote online through www.bedssu.co.uk/vote. 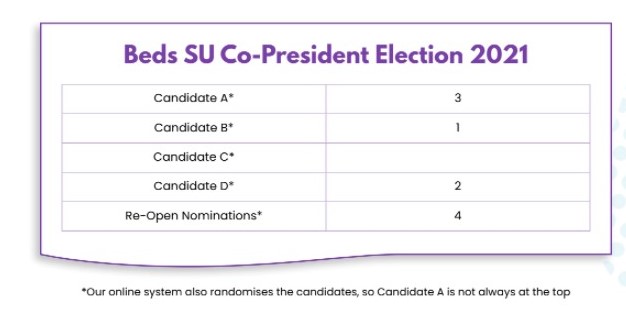 Changing Votes: Voters have the right to change their vote at any point until the close of elections. This means that even voters who have already voted are worth talking to.

All registered students at UoB can log on to the Beds SU website using their UoB log in and submit their vote anytime between 18:00 Monday 8th March – 16:00 Wednesday 24th March.

If there is a student facing technical issues, they must contact elections@beds.ac.uk as soon as possible for support. We cannot handle issues if we do not know the student details and the nature of the issue, so please encourage students with issues to send us screenshots of the error, alongside their details.

This year we are using a new voting system, similar to the American “electoral college” system, to better represent the views and voices of students at our smaller campuses. Our new system is based on two tried and tested systems of voting, so even though it may be new to us, we can have confidence in the system returning us an accurate result.

The overall winner, is the candidate with the most Campus Points. This means that candidates willhave to win over voters on more than one campus in order to win the overall election.

The winners of the Campus Points will be decided using Alternative Vote. This looks much like our previous systems that you may be familiar with:

• If no other candidate has enough votes to secure the other Campus Points, we will start to eliminate candidates and redistribute votes to the 2nd preferences (those ranked “2” by voters), starting with the candidates with the fewest votes

• This cycle repeats until all Campus Points have been awarded

Once all the counts have taken place across all campus groups, we then count the number of Campus Points each candidate has. The candidate with the most overall Campus Points wins (the winner is decided by the First-past-the-post method - this should be familiar to you as per the American election system - although we nearly always have more than 2 candidates fighting for votes!).